Jo-Wilfried Tsonga (French pronunciation: ​[(d)ʒo wilfʁid t͡sɔŋɡa]; born (1985-04-17)17 April 1985) is a French professional tennis player currently ranked World No. 10. He was born in Le Mans, to a French mother, Évelyne, and a Congolese father, Didier Tsonga, who moved to France in the 1970s to play handball. He is also the only player to have Grand Slam wins against each of the big four (Roger Federer, Rafael Nadal, Novak Djokovic and Andy Murray). 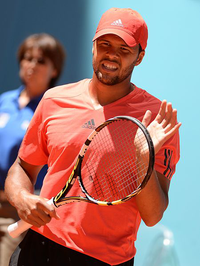 image credit
Jo-Wilfried Tsonga by Tatiana, is licensed under cc-by-sa-2.0, resized from the original.