Jo Ann Pflug (born May 2, 1940) is a former American motion picture and television actress who retired in 1997.Pflug's first major role was as U.S. Army nurse Lt. Maria "Dish" Schneider in 1970's MASH, and she also appeared in Catlow (1971) with Yul Brynner, and Where Does It Hurt? (1972) starring Peter Sellers. Other notable roles include the voice of Invisible Girl in the 1967 animated version of Fantastic Four, Lt. Katherine O'Hara in the television series spin-off of Operation Petticoat, Boss Jack's wife in Traveller (1997), and Cynthia Vaughn in 1997's Midnight in the Garden of Good and Evil, directed by Clint Eastwood (her last role to date).Pflug was the co-star of the made for television movie, The Night Strangler in 1973, which was a sequel to The Night Stalker of 1972, and a precursor of the TV series Kolchak: The Night Stalker of 1974-1975. She also starred in the TV werewolf movie Scream of the Wolf (1974) alongside Peter Graves and Clint Walker. 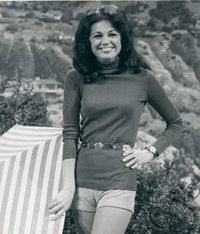