Jim Knipfel (pronounced Kah-nipfel) (born June 2, 1965), is an American novelist, autobiographer, and journalist.A native of Wisconsin, Knipfel, who suffers from retinitis pigmentosa, is the author of a series of critically acclaimed memoirs, Slackjaw, Quitting the Nairobi Trio, and Ruining It for Everybody, as well as two novels, The Buzzing and Noogie's Time to Shine. He wrote news stories, film and music reviews, the crime blotter, and feature articles until June 13, 2006 for the weekly alternative newspaper New York Press, where he was the only staff writer. 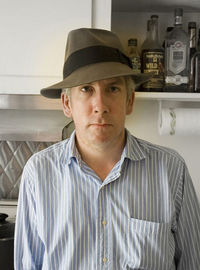 image credit
Jim Knipfel by Rachel Bradley & Luca, is licensed under cc-by-sa-2.0, resized from the original.