James Joseph "Jim" Harbaugh (/ˈhɑrbɔː/; born December 23, 1963) is the head football coach at the University of Michigan and a former quarterback. He played college football at Michigan and played in the National Football League (NFL) for 14 seasons, from 1987 to 2000. Harbaugh has been a head coach since 2004. He coached at the University of San Diego for three seasons, then coached Stanford University of the Pac-10 for four seasons, before becoming the coach of the San Francisco 49ers of the NFL, a position he held for four seasons. Starting in 2015, Harbaugh will be coaching for his alma mater, Michigan.Harbaugh was born in Toledo, Ohio. His father Jack was a football coach, and the family lived in Ohio, Kentucky, Iowa, Michigan, and California. He attended high school in Ann Arbor, Michigan, and Palo Alto, California, when his father was an assistant coach at Michigan and Stanford, respectively. 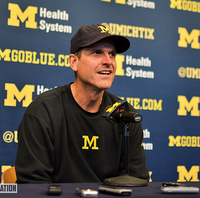 image credit
Jim Harbaugh by Maize & Blue Nation, is licensed under cc-by-2.0, resized from the original.