Jhumpa Lahiri (Bengali: ঝুম্পা লাহিড়ী; born on July 11, 1967) is an Indian American author. Lahiri's debut short story collection, Interpreter of Maladies (1999), won the 2000 Pulitzer Prize for Fiction, and her first novel, The Namesake (2003), was adapted into the popular film of the same name. She was born Nilanjana Sudeshna but goes by her nickname (or in Bengali, her "Daak naam") Jhumpa. Lahiri is a member of the President's Committee on the Arts and Humanities, appointed by U.S. President Barack Obama. Her book The Lowland, published in 2013, was a nominee for the Man Booker Prize and the National Book Award for Fiction. 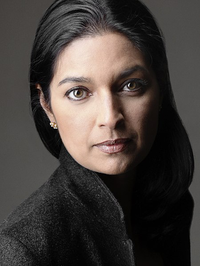 image credit
Jhumpa Lahiri by Lynn Neary, is licensed under cc-by-sa-4.0, resized from the original.