Jerome Allen "Jerry" Seinfeld (born April 29, 1954) is an American comedian, actor, writer, and television/film producer, best known for playing a semi-fictional version of himself in the sitcom Seinfeld (1989–1998), which he co-created and co-wrote with Larry David. For the show's final two seasons, they were co-executive producers.In his first major foray back into the media since the finale of Seinfeld, he co-wrote and co-produced the 2007 film Bee Movie, also voicing the lead role of Barry B. 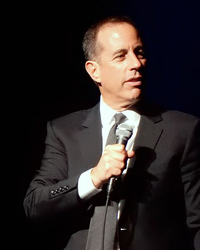 image credit
Jerry Seinfeld by slgckgc, is licensed under cc-by-2.0, resized from the original.