Jeremiah "Jerry" O'Connell (born February 17, 1974) is an American actor, best known for his roles as Quinn Mallory in the TV series Sliders, Andrew Clements in My Secret Identity, Vern Tessio in the film Stand by Me, Derek in Scream 2, Charlie Carbone in Kangaroo Jack, and Detective Woody Hoyt on the drama Crossing Jordan. He starred as Pete Kaczmarek in the CBS TV series The Defenders until its cancellation in 2011. He also had a starring role in the comedy horror film Piranha 3D. 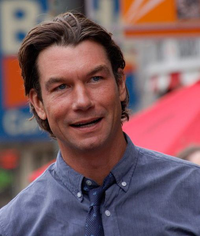 image credit
Jerry O'Connell by Angela George, is licensed under cc-by-sa-3.0, resized from the original.