Jérôme Agyenim Boateng (German pronunciation: [ʒeˈʁoːm bo.aˈtɛŋ]) (born 3 September 1988) is a German footballer who currently plays for Bayern Munich. A versatile defender, Boateng primarily is a centre back, although he is a capable full back on either side.Boateng started his career at Hertha BSC where he developed from the youth ranks to the main team. After his first season at Hertha he soon signed for Hamburger SV and established himself as an integral part of the team, helping Hamburg reach the Europa League semi-finals twice consecutively.Physically strong and composed, he garnered a reputation as a tough-tackling, versatile defender. He also played in the Germany U-21 side, which won the Euro 2009 U-21 Championship and was soon promoted to the national side, being selected in Germany's 2010 World Cup squad. 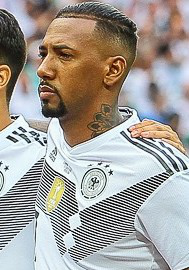 image credit
Jrme Boateng by , is licensed under cc-by-sa-3.0, resized from the original.