Jeffrey Wright (born December 7, 1965) is an American film, television and stage actor. He is known for such roles as Belize in the HBO miniseries Angels in America, Muddy Waters in Cadillac Records, Jean-Michel Basquiat in Basquiat, Felix Leiter in the James Bond films Casino Royale and Quantum of Solace, Valentin Narcisse in the HBO series Boardwalk Empire, and Beetee in The Hunger Games: Catching Fire. 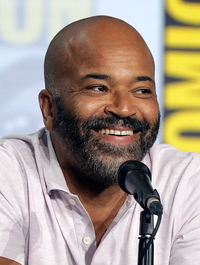 image credit
Jeffrey Wright (actor) by Gage Skidmore, is licensed under cc-by-sa-3.0, resized from the original.