Jeffrey Marshall "Jeff" Foxworthy (born September 6, 1958) is an American stand-up comedian, actor, television and radio personality, author, and voice artist. He is a member of the Blue Collar Comedy Tour, a comedy troupe which also comprises Larry the Cable Guy, Bill Engvall, and Ron White. Known for his "You might be a redneck" one-liners, Foxworthy has released six major-label comedy albums. For two seasons, he has hosted GSN's The American Bible Challenge. 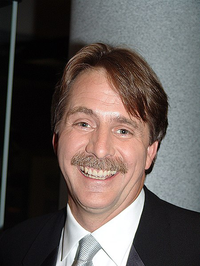 image credit
Jeff Foxworthy by Kingkongphoto & www.celebrity-photos.com, is licensed under cc-by-sa-2.0, resized from the original.