Jean Henri Gaston Giraud (French: [ʒiʁo]; 8 May 1938 – 10 March 2012) was a French artist, cartoonist, and writer, who worked in the Franco-Belgian bandes dessinées tradition. Giraud earned worldwide fame, predominantly under the pseudonym Mœbius, and to a lesser extent Gir, which he used for the Blueberry series and his paintings. Esteemed by Federico Fellini, Stan Lee and Hayao Miyazaki among others, he received international acclaim. Moebius contributed storyboards and concept designs to numerous science fiction and fantasy films, including Alien, Willow, Tron (1982), The Abyss (1989) and The Fifth Element. 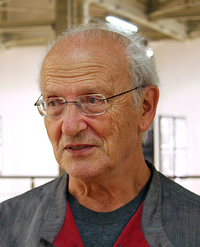 image credit
Jean Giraud by Jarek Obwaanek, WRAK.PL, is licensed under cc-by-sa-4.0, resized from the original.