Jaswinder Singh Bains, more popularly known as Jazzy Bains or Jazzy B is a Punjabi language Bhangra singer-songwriter. He was born on 1 April 1975 in Durgapur, Nawanshahr in tehsil of Jalandhar, Punjab, India. When he was 5 years old, his family moved to Vancouver, Canada. He now resides in Birmingham, England. He has released 11 studio albums, including two religious ones. He has collaborated on many tracks and two soundtracks. He is often called the "Crown Prince of Bhangra". He is a big fan of Kuldeep Manak. He is married to Hardeep Kaur and has a son and daughter. 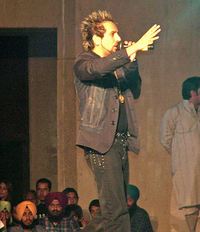 image credit
Jazzy B by Guilhem Vellut, is licensed under cc-by-2.0, resized from the original.