Jayne Mansfield (born Vera Jayne Palmer; April 19, 1933 – June 29, 1967) was an American actress in film, theatre, and television. She was also a nightclub entertainer, a singer, and one of the early Playboy Playmates. She was a major Hollywood sex symbol of the 1950s and early 1960s. 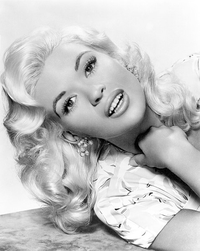