Jamia Suzette Mays, better known as Jayma Mays (born July 16, 1979), is an American actress and singer. She is known for playing Emma Pillsbury on the Fox musical series Glee, her recurring role as Charlie Andrews on the NBC sci-fi serial Heroes, and for starring in the films Paul Blart: Mall Cop and The Smurfs. Since October 2013, she has been portraying the role of Debbie on the sitcom The Millers. 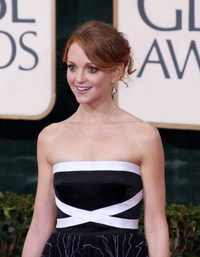 image credit
Jayma Mays by Mel, is licensed under cc-by-sa-2.0, resized from the original.