Daniel Jason Sudeikis (/sʉˈdeɪkɪs/ sə-DAY-kis; born September 18, 1975) is an American actor, voice actor, screenwriter, and comedian. He began his career in improv comedy. In 2003, he was hired as a sketch writer for Saturday Night Live and became a cast member from 2005 to 2013. He has appeared on television in 30 Rock, The Cleveland Show, Eastbound & Down, and other shows. He is also known for his roles in the films Hall Pass, Horrible Bosses, Epic and We're the Millers. 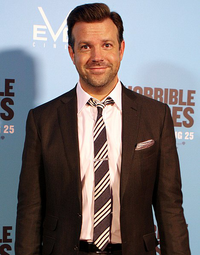 image credit
Jason Sudeikis by Eva Rinaldi, is licensed under cc-by-sa-2.0, resized from the original.