Jason Statham (/ˈsteɪθəm/ STAY-thəm; born 26 July 1967) is an English actor, producer, martial artist, and former diver. He is known for his roles in the Guy Ritchie crime films Revolver, Snatch, and Lock, Stock and Two Smoking Barrels. He has also appeared in films such as The Italian Job, The Transporter, Death Race, Crank, The Bank Job, War, The Expendables, and The Expendables 2. He usually performs his own stage combat and stunts, and is noted for being typecast as an antihero. 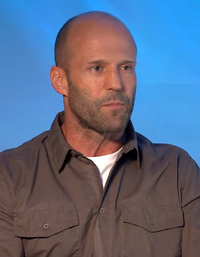 image credit
Jason Statham by MTV International, is licensed under cc-by-3.0, resized from the original.