Jason Anthoney Richardson (born January 20, 1981) is an American retired professional basketball player who played 14 seasons in the National Basketball Association (NBA). Richardson was taken by the Golden State Warriors as the fifth overall pick in the 2001 NBA draft after playing college basketball for Michigan State University. He won the NBA Dunk Contest in both 2002 and 2003, becoming the second of four players, after Michael Jordan, to win the competition back-to-back. Other back-to-back winners include Nate Robinson, and Zach LaVine. After playing 6 seasons with Golden State, Richardson has also played for the Charlotte Bobcats (now Charlotte Hornets), Phoenix Suns, Orlando Magic, and the Philadelphia 76ers. 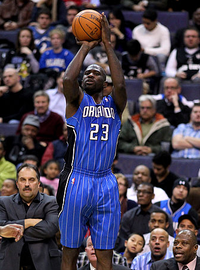 image credit
Jason Richardson by Keith Allison, is licensed under cc-by-sa-2.0, resized from the original.