Janie Marie Fricke (born December 19, 1947 in South Whitley, Indiana), also known as Janie Frickie, is an American country music singer, best remembered for a series of country music hits in the early- to mid-1980s.Fricke was one of the most popular female country singers of the 1980s, producing a string of hits and proving herself a versatile vocalist with a particular flair for ballads.She won the Country Music Association's "Female Vocalist of the Year" awards in 1982 and 1983. 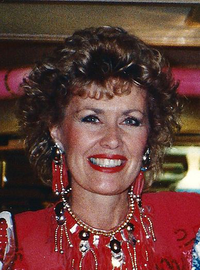 image credit
Janie Fricke by Daver812, is licensed under cc-by-sa-3.0, resized from the original.