Jane Marie Lynch (born July 14, 1960) is an American actress, singer, and comedian. She gained fame in Christopher Guest's improv mockumentary pictures such as Best in Show. Notable awards she has won for her portrayal of Sue Sylvester in Glee include the Primetime Emmy Award, Golden Globe Award, Screen Actors Guild Award for Outstanding Performance by an Ensemble in a Comedy Series, TCA Award for Individual Achievement in Comedy, Satellite Award for Best Supporting Actress – Series, Miniseries, or Television Film, and the People's Choice Award for Favorite TV Comedy Actress. 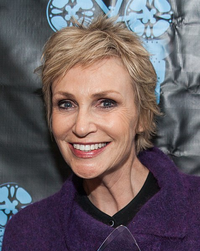 image credit
Jane Lynch by Peterb1234, is licensed under cc-by-sa-4.0, resized from the original.