Jake Shields (born January 9, 1979) is an American mixed martial artist, currently fighting in the welterweight division for the World Series of Fighting. He was the last Rumble on the Rock 175 lb (79 kg) champion, the only Elite XC Welterweight Champion, a former Shooto Welterweight Champion and former Strikeforce Middleweight Champion. He also fought for the Ultimate Fighting Championship (UFC).He has trained extensively with Fairtex SF and Cesar Gracie, and is a member of the "Skrap Pack" which includes fellow Cesar Gracie students Dave Terrell, Nick Diaz, Nate Diaz and Gilbert Melendez. After his loss to Akira Kikuchi he won 15 consecutive fights over six years, until his loss to Georges St-Pierre. He describes his style as American Jiu-jitsu. 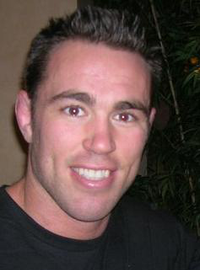 image credit
Jake Shields by Dandvsp, is licensed under cc-by-sa-3.0, resized from the original.