Paul Jackson Pollock /ˈpɒlək/ (January 28, 1912 – August 11, 1956) was an American painter and a major figure in the abstract expressionist movement. He was widely noticed for his "drip technique" of pouring or splashing liquid household paint onto a horizontal surface, enabling him to view and paint his canvases from all angles. It was also called all-over painting and action painting, since he covered the entire canvas and used the force of his whole body to paint, often in a frenetic dancing style. This extreme form of abstraction divided the critics: some praised the immediacy of the creation, while others derided the random effects. In 2016, Pollock's painting titled Number 17A was reported to have fetched US$200 million in a private purchase. 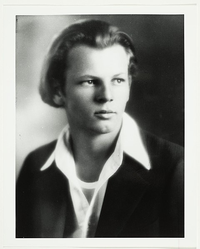