Jack O'Connell (born 1 August 1990) is an English actor. Born and raised in Derby, he trained in acting at the Television Workshop, which led to his film debut in the coming-of-age drama This Is England (2006). O'Connell is largely known for playing angry, troubled youth. He first found fame as the hard-living James Cook on the E4 teen series Skins (2009–10), followed by other lead roles in the television dramas Dive (2010) and United (2011). His breakthrough came when he gave critically acclaimed performances in the independent films Starred Up (2013) and '71 (2014), and starred as war hero Louis Zamperini in his first major Hollywood picture, Angelina Jolie's Unbroken (2014). O'Connell consequently won the BAFTA Rising Star Award. 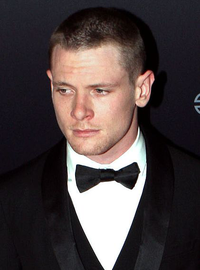 image credit
Jack O'Connell (actor) by Eva Rinaldi, is licensed under cc-by-sa-2.0, resized from the original.