John Edgar Hoover (January 1, 1895 – May 2, 1972) was the first Director of the Federal Bureau of Investigation (FBI) of the United States. He was appointed as the sixth director of the Bureau of Investigation—predecessor to the FBI—in 1924 and was instrumental in founding the FBI in 1935, where he remained director until his death in 1972, aged 77. Hoover is credited with building the FBI into a larger crime-fighting agency than it was at its inception, and with instituting a number of modernizations to police technology, such as a centralized fingerprint file and forensic laboratories. Later in life and after his death, Hoover became a controversial figure as evidence of his secretive abuses of power began to surface. He was found to have exceeded the jurisdiction of the FBI,and to have used the FBI to harass political dissenters and activists, to amass secret files on political leaders,and to collect evidence using illegal methods. Hoover consequently amassed a great deal of power and was in a position to intimidate and threaten sitting presidents. According to biographer Kenneth Ackerman, the notion that Hoover's secret files kept presidents from firing him is a myth. However, Richard Nixon was recorded as stating in 1971 that one of the reasons he did not fire Hoover was that he was afraid of reprisals against him from Hoover. According to President Harry S. Truman, Hoover transformed the FBI into his private secret police force. Truman stated: "we want no Gestapo or secret police. The FBI is tending in that direction. They are dabbling in sex-life scandals and plain blackmail. J. Edgar Hoover would give his right eye to take over, and all congressmen and senators are afraid of him." 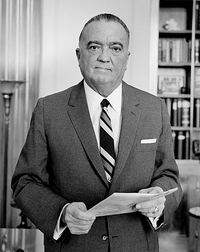