Angela Isadora Duncan (May 27, 1877 – September 14, 1927) was an American dancer. Born in California, she lived in Western Europe and the Soviet Union from the age of 22 until her death at age 50. She performed to acclaim throughout Europe after being exiled from the United States for her pro-Soviet sympathies.Duncan's fondness for flowing scarves contributed to her death in an automobile accident in Nice, France, when she was a passenger in an Amilcar. Her silk scarf, draped around her neck, became entangled around the open-spoked wheels and rear axle, breaking her neck. In 1987, she was inducted into the National Museum of Dance's Mr. & Mrs. Cornelius Vanderbilt Whitney Hall of Fame. 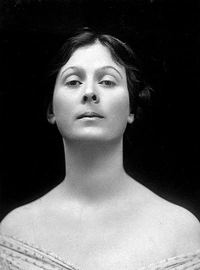