Isabela Yolanda Moner (born July 10, 2001), known professionally as Isabela Merced since 2019, is an American actress and singer. She played the lead role of CJ Martin on the Nickelodeon television series 100 Things to Do Before High School (2014–2016) and voiced Kate in Nickelodeon's animated spinoff series Dora and Friends: Into the City! (2014–2017). In film, she has played Izabella in Transformers: The Last Knight (2017), Lizzy in Instant Family (2018), Isabel in Sicario: Day of the Soldado (2018), the titular character in Dora and the Lost City of Gold (2019), and Rachel Cooper in the Netflix film Sweet Girl (2021). 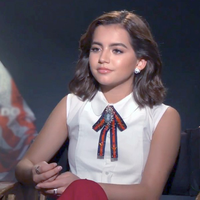 image credit
Isabela Merced by ColliderVideo, is licensed under cc-by-3.0, resized from the original.