Imogen Jennifer Heap (/ˈɪmədʒɨn ˈhiːp/; born 9 December 1977) is an English singer-songwriter and composer. She is known for her work as part of the musical duo Frou Frou and her solo albums, which she writes, produces, and mixes. She has produced four solo albums. Her 2009 album, Ellipse, was a North American chart success that earned Heap two Grammy nominations, winning Best Engineered Album, Non-Classical, in recognition of her technical and engineering work in said record. In 2010 she received the British Academy's Ivor Novello Award for International Achievement. 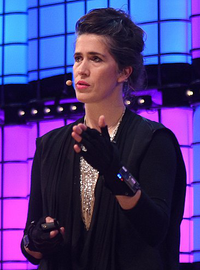 image credit
Imogen Heap by Web Summit, is licensed under cc-by-2.0, resized from the original.