Huey Percy Newton (February 17, 1942 – August 22, 1989) was an African-American political and urban activist who, along with Bobby Seale, co-founded the Black Panther Party in 1966. Newton had a long series of confrontations with law enforcement, including several convictions, while he participated in political activism. He continued to pursue an education, eventually earning a Ph.D. in Social Science. Newton spent time in prison for manslaughter and was involved in a shooting that killed a police officer. In 1989 he was shot and killed in Oakland, California by a member of the Black Guerrilla Family. 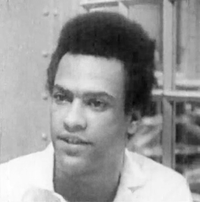