Hilary Erhard Duff (born September 28, 1987) is an American actress, singer-songwriter, entrepreneur, model, producer and author. Born and raised in Houston, Texas, she appeared in local theater productions and television commercials in her early childhood. Duff was established as a teen idol after being cast in the Disney Channel television series Lizzie McGuire in the early 2000s and its motion picture The Lizzie McGuire Movie (2003), in which she portrayed the titular character. She has also contributed to several humanitarian causes, including Blessings in a Backpack and the Think Before You Speak Campaign. 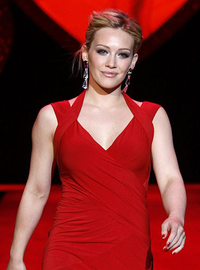