Henry Maudslay () (22 August 1771 – 14 February 1831) was a British machine tool innovator, tool and die maker, and inventor. He is considered a founding father of machine tool technology. His inventions, such as the first industrially practical screw-cutting lathe in 1800 which standardized screw thread sizes for the first time which in turn allowed the application of interchangeable parts (a prerequisite for mass production), were an important foundation for the Industrial Revolution. 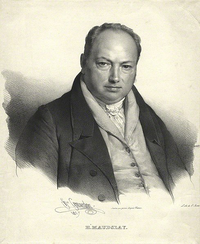