Hema Malini (Born 16 October 1948) is an Indian actress, director and producer, Bharatanatyam dancer-choreographer, and a politician, well known for the roles in Hindi cinema. Making her acting debut in Sapno Ka Saudagar (1968), she went on to appear in numerous Bollywood films, most notably those with actor and future-husband Dharmendra and with Rajesh Khanna. Malini was initially promoted as "Dream Girl", and in 1977 starred in a film of the same name. She is a member of India's Bharatiya Janata Party and was nominated member by the party in Rajya Sabha, the upper House of parliament during 2003–2009. 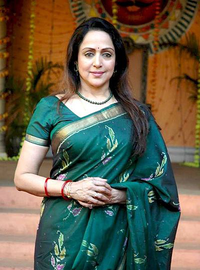 image credit
Hema Malini by IndiaFM/Bollywoodhungama.com, is licensed under cc-by-3.0, resized from the original.