Harvey Forbes Fierstein (born June 6, 1954) is an American actor and playwright, noted for two Tony Awards distinctions. He has won Tony awards as Best Leading Actor in both a play and a musical. He also won an award for writing the play for which he won best actor. He is now a champion for gay civil rights.He won Best Play and originated the Best Actor in a Play-winning lead role in his long-running play Torch Song Trilogy, about a gay drag-performer and his quest for true love and family. He also wrote the book for the musical, La Cage aux Folles, for which he won the Tony Award for Best Book of a Musical. Additionally, he won Tony Award for Best Actor in a Musical for his role in Hairspray and wrote the book for the Tony Award for Best Musical-winning Kinky Boots. Fierstein was inducted into the American Theater Hall of Fame in 2007. 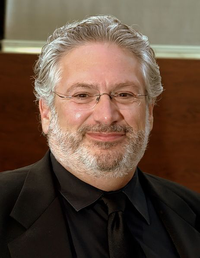 image credit
Harvey Fierstein by David Shankbone, is licensed under cc-by-3.0, resized from the original.