Haruki Murakami (村上 春樹, Murakami Haruki, born January 12, 1949) is a contemporary Japanese writer. Murakami is translated into 50 languages and his best-selling books have been published in millions of copies. His works of fiction and non-fiction have garnered critical acclaim and numerous awards, both in Japan and internationally, including the World Fantasy Award (2006) and the Frank O'Connor International Short Story Award (2006), while his whole oeuvre garnered the Franz Kafka Prize (2006) and the Jerusalem Prize (2009), among others. 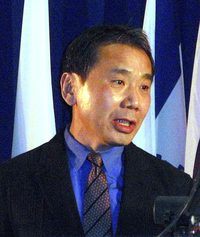 image credit
Haruki Murakami by Galoren.com, is licensed under cc-by-sa-4.0, resized from the original.