Harold Perrineau (born August 7, 1963) is an American actor, known for the roles of Michael Dawson in the U.S. television series Lost, Link in The Matrix films and games, Augustus Hill in the American television series Oz, and Mercutio in Baz Luhrmann's Romeo + Juliet. He starred in ABC's comedy-drama television series The Unusuals, playing NYPD homicide detective Leo Banks and was cast as ruthless drug kingpin Damon Pope on the FX drama Sons of Anarchy. He has appeared in several other high-profile films, including The Best Man, 28 Weeks Later, 30 Days of Night: Dark Days, and Zero Dark Thirty. He also starred alongside Anthony Hopkins and Alec Baldwin in the survival drama The Edge. 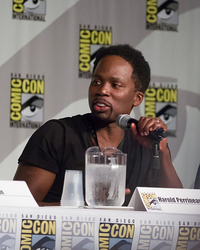 image credit
Harold Perrineau by Derek Hofmann, is licensed under cc-by-sa-2.0, resized from the original.