Harold Hamm (born December 11, 1945) is an American oilman who is best known for pioneering the development of the large shale oil resources of the Bakken formation. In 2012 Hamm was ranked by Forbes magazine as the 30th richest person in America and 76th richest person in the world, with a net worth estimated at $11 billion, a figure it increased to $17 billion in early 2014. In 2012, presidential candidate Mitt Romney named Hamm as his energy advisor, and thereafter Hamm made substantial monetary and advisory contributions to the election effort. 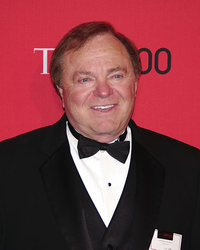 image credit
Harold Hamm by David Shankbone, is licensed under cc-by-3.0, resized from the original.