Henry Albert "Hank" Azaria (/əˈzɛəriə/ ə-ZAIR-ee-ə; born April 25, 1964) is an American film, television and stage actor, director, producer, writer, voice actor, and comedian. He is noted for being one of the principal voice actors on the animated television series The Simpsons (1989–present), on which he performs the voices of Moe Szyslak, Apu Nahasapeemapetilon, Chief Wiggum, Comic Book Guy, Carl Carlson and numerous others. Azaria, who attended Tufts University, joined the show with little voice acting experience, but became a regular in its second season. Azaria was married to actress Helen Hunt from 1999 to 2000. 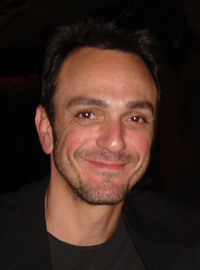 image credit
Hank Azaria by https://www.flickr.com/photos/nickslastresort/, is licensed under cc-by-2.0, resized from the original.