H. Jon Benjamin (born May 23, 1966) is an American actor, comedian and writer. He is best known for his voice acting roles as Ben on Dr. Katz, Professional Therapist, Coach McGuirk and Jason on Home Movies, Sterling Archer in FX's animated series Archer and Bob Belcher in the Fox animated series Bob's Burgers. Benjamin also starred in his own series on Comedy Central, Jon Benjamin Has a Van. 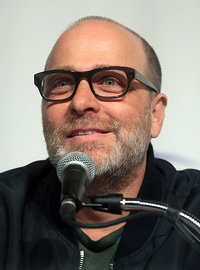 image credit
H. Jon Benjamin by Gage Skidmore, is licensed under cc-by-sa-3.0, resized from the original.