Gustav Landauer (7 April 1870 – 2 May 1919) was one of the leading theorists on anarchism in Germany in the end of the 19th and the beginning of the 20th century. He was an advocate of social anarchism and an avowed pacifist. Landauer is also known for his study and translations of William Shakespeare's works into German. One of his grandchildren, with wife and author Hedwig Lachmann, is Mike Nichols, the American television, stage and film director, writer, and producer. 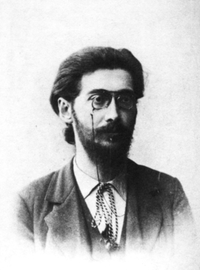