Grover Glenn Norquist (born October 19, 1956) is an American political advocate who is founder and president of Americans for Tax Reform, an organization that opposes all tax increases and a co-founder of the Islamic Free Market Institute. A libertarian-leaning Republican, he is the primary promoter of the "Taxpayer Protection Pledge," a pledge signed by lawmakers who agree to oppose increases in marginal income tax rates for individuals and businesses, as well as net reductions or eliminations of deductions and credits without a matching reduced tax rate. Prior to the November 2012 election, the pledge was signed by 95% of all Republican members of Congress and all but one of the candidates running for the 2012 Republican presidential nomination. 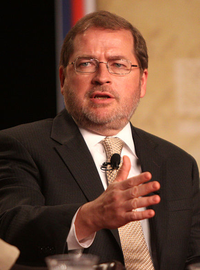 image credit
Grover Norquist by Gage Skidmore, is licensed under cc-by-sa-3.0, resized from the original.