Glenn Lee Beck (born February 10, 1964) is a politically conservative American television and radio host, political commentator, author, television network producer, media personality, and entrepreneur. He hosts the Glenn Beck Radio Program, a nationally syndicated talk-radio show that airs throughout the United States on Premiere Radio Networks. He formerly hosted the Glenn Beck television program, which ran from January 2006 to October 2008 on HLN and from January 2009 to June 2011 on the Fox News Channel. He currently has his hour long afternoon show, The Glenn Beck Program on weekdays, and his three hour morning radio show broadcast on the network. 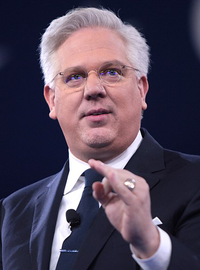 image credit
Glenn Beck by Gage Skidmore, is licensed under cc-by-sa-2.0, resized from the original.