Georgia Rose Harriet Barnes (born 4 February 1990), known mononymously as Georgia, is an English record producer, songwriter, singer, rapper and drummer. The daughter of Leftfield cofounder Neil Barnes, Georgia began her music career as a drummer for artists such as Kwes and Kae Tempest. She began her career as a singer and record producer with the release of her debut studio album Georgia (2015). Her second studio album Seeking Thrills was released in January 2020. Georgia is signed to the label Domino. In 2018 she released the song "Started Out". In 2019 she performed at the Glastonbury Festival and won the Association of Independent Music's One to Watch award in association with BBC Music Introducing. Vice have described her sound as "euphoric, late-night dance", while her 2015 self-titled album was compared to Missy Elliot and MIA. Talking about her 2019 single "About Work the Dancefloor" with Sean Tayler from Futuremag Music, Georgia shared "I made this song after a weekend in Berlin entirely dancing in a few clubs and I realised how important the dancefloor is to people to give them a certain relief from their everyday activities". Her album Seeking Thrills was shortlisted for the Mercury Prize 2020. 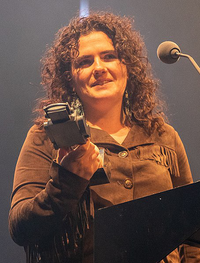 image credit
Georgia (musician) by Jwslubbock, is licensed under cc-by-sa-4.0, resized from the original.