Geert Wilders ([ˈɣeːrt ˈʋɪldərs], born 6 September 1963) is a Dutch politician and the founder and leader of the Party for Freedom (Partij voor de Vrijheid – PVV), which is a political party in the Dutch parliament. Wilders is the Parliamentary group leader of his party in the Dutch House of Representatives. In the formation in 2010 of the Rutte cabinet, a minority cabinet of VVD and CDA, he actively participated in the negotiations, resulting in a "support agreement" (gedoogakkoord) between the PVV and these parties, but withdrew his support in April 2012, citing disagreements with the cabinet on proposed budget cuts. Wilders is best known for his criticism of Islam. Wilders' views regarding Islam have made him a controversial figure in the Netherlands and abroad, and since 2004 he receives permanent personal protection by armed bodyguards. Raised a Roman Catholic, Wilders left the church at his coming of age. His travels to Israel as a young adult, as well as to neighbouring Arab countries, helped form his political views. Wilders worked as a speechwriter for the conservative-liberal People's Party for Freedom and Democracy (Volkspartij voor Vrijheid en Democratie – VVD), and later served as parliamentary assistant to party leader Frits Bolkestein from 1990 to 1998. He was elected to the Utrecht city council in 1996, and later to the House of Representatives. Citing irreconcilable differences over the party's position on the accession of Turkey to the European Union, he left the VVD in 2004 to form his own party, the Party for Freedom. Wilders has campaigned to stop what he views as the "Islamisation of the Netherlands". He has compared the Quran to Mein Kampf and has campaigned to have the book banned in the Netherlands. He advocates ending immigration from Muslim countries, and supports banning the construction of new mosques. Wilders was a speaker at the Facing Jihad Conference held in Jerusalem in 2008, which discussed the dangers of jihad, and has called for a hard line against what he called the "street terror" exerted by minorities in Dutch cities. His controversial 2008 film about his views on Islam, Fitna, received international attention. He has been described in the media as populist and labeled far-right, although this is disputed by other observers. Wilders, who long refused to align himself with European far-right leaders such as Jean-Marie Le Pen and Jörg Haider and expressed concern of being "linked with the wrong rightist fascist groups,", views himself as a right-wing liberal. More recently, however, Wilders worked together with the French National Front's Marine Le Pen in a failed attempt to form a parliamentary group in the European Parliament which would also have included Austria's Freedom Party, Italy's Northern League, and Belgium's Flemish Interest. He will face trial once again to start at March 18, 2016 with the accusation of inciting "discrimination and hatred" against Moroccans living in the Netherlands. 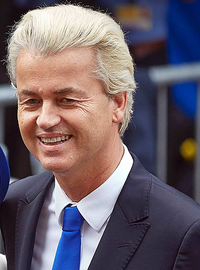