Gary Leonard Oldman (born 21 March 1958) is an English actor, filmmaker, and musician. Oldman rose to prominence in Britain with his portrayals of Sid Vicious in Sid and Nancy (1986) and Joe Orton in Prick Up Your Ears (1987), as well as that of a football firm leader in The Firm (1989), before going on to achieve international renown as Lee Harvey Oswald in JFK (1991) and Count Dracula in Bram Stoker's Dracula (1992). Oldman starred as antagonist Norman Stansfield in Léon: The Professional (1994), as well as the villains of motion pictures such as True Romance (1993), The Fifth Element (1997), Air Force One (1997), and The Contender (2000); he meanwhile gave an acclaimed reading of Ludwig van Beethoven in Immortal Beloved (1994). 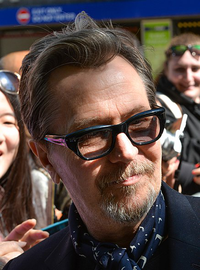 image credit
Gary Oldman by John Bauld, is licensed under cc-by-2.0, resized from the original.