Gabriella Mary "Gaby" Hoffmann (born January 8, 1982) is an American film and television actress. Born to actress Janet Hoffmann, an Andy Warhol superstar, Hoffmann rose to prominence as a child actor, debuting in Field of Dreams (1989) and having roles in Uncle Buck (1989) and Sleepless in Seattle (1993). She began transitioning into teenage and adult roles with the films Now and Then (1995), 200 Cigarettes (1999), and You Can Count on Me (2000). More recently, Hoffmann has starred alongside Michael Cera in Crystal Fairy & the Magical Cactus (2013), and has had guest appearances in the television series Louie and Girls. 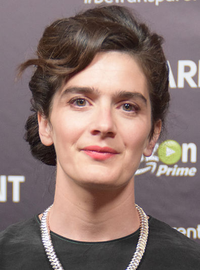 image credit
Gaby Hoffmann by Mingle Media TV, is licensed under cc-by-sa-2.0, resized from the original.