Gabriel J. Iglecias (born July 15, 1976), known professionally as Gabriel Iglesias and comically as Fluffy, is an American comedian, actor, writer, producer and voice actor. He is known for his shows I'm Not Fat… I'm Fluffy and Hot & Fluffy. He employs storytelling, effected voices and sound effects in his act, whose other trademarks include references to his weight and his use of Hawaiian shirts. He has been called a "comedy genius" by Hector Saldaña of the San Antonio Express-News. 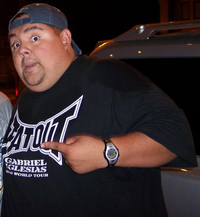 image credit
Gabriel Iglesias by http://www.facebook.com/ValamiCleaver, is licensed under cc-by-sa-3.0, resized from the original.