Herbert Randall Wright III (born October 8, 1995), better known by his stage name G Herbo (formerly Lil Herb), is an American rapper from Chicago, Illinois. Herbo is signed to Machine Entertainment Group. He has released the mixtapes Welcome to Fazoland (2014), Pistol P Project (2014), Ballin Like I'm Kobe (2015), and Strictly 4 My Fans (2016). His studio albums are his debut Humble Beast (2017) and with Southside of 808 Mafia, Swervo (2018), his first major release through Epic Records. His third studio album, PTSD (2020), became his first top ten entry on the Billboard 200, while his fourth album, 25, was released in 2021, and marked his first release through Republic Records. 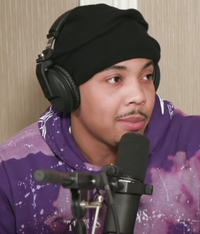 image credit
G Herbo by MILLION DOLLAZ WORTH OF, is licensed under cc-by-3.0, resized from the original.