Fredric Lehne (born February 3, 1959), also known as Fredric Lane, is an American character actor. Lehne has played in over 200 films, mini-series, and television shows as well as many stage productions including works by Shakespeare, Moliere and Ibsen on Broadway. His TV credits include Bones, Lost, Criminal Minds, Supernatural, Medium, Without a Trace, Night Stalker, Malcolm in the Middle, CSI, CSI: NY, JAG, Firefly, NCIS, Cold Case, Crossing Jordan, Touched by an Angel, The X-Files, Chicago Hope, ER, Sliders, NYPD Blue, Babylon 5, Matlock, Wiseguy, Murder, She Wrote, Dallas, Cagney & Lacey and Eight is Enough. In the HBO miniseries From the Earth to the Moon, Lehne played astronaut Walter Cunningham. He also played the role of Tommy in the TV movie Coward Of The County which also starred singer/actor Kenny Rogers. Lehne's film credits include Men in Black, Con Air, Ordinary People, Being There, Zero Dark Thirty, and The Dark Knight Rises. 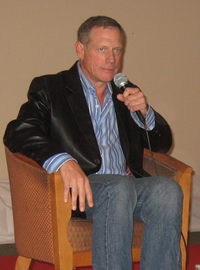 image credit
Fredric Lehne by CelebHeights.com, is licensed under cc-by-sa-4.0, resized from the original.