Karl Fredrik "Freddie" Ljungberg (Swedish pronunciation: [ˈfreːdrɪk ˈjɵŋ.ˈbærj]) (born 16 April 1977 in Vittsjö, Sweden) is a Swedish former footballer who played as a winger. He currently coaches Arsenal's Under-16s. He began his career at Halmstads BK and went on to spend most of his career at Arsenal, where he won honours including two Premier League titles and three FA Cups, scoring in two finals including the victory in 2002. After leaving Arsenal in 2007, he had short spells at a number of clubs in England, Scotland, the United States, Japan and India. An international for a full decade, Ljungberg earned 75 caps and was captain of the Swedish national team until he announced his international retirement after UEFA Euro 2008. Ljungberg was a model for Calvin Klein underwear until 2007. He previously represented brands such as Nike, Procter & Gamble, L'Oreal, Puma, Beats, ESPN and Pepsi, as well as running his own blog 2009. 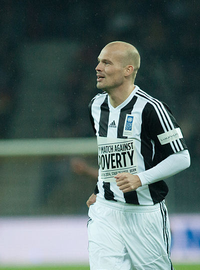 image credit
Freddie Ljungberg by Ludovic Pron, is licensed under cc-by-sa-3.0, resized from the original.