Franklin Delano Roosevelt (/ˈroʊzəvəlt/ ROH-zə-vəlt, his own pronunciation, or /ˈroʊzəvɛlt/ ROH-zə-velt) (January 30, 1882 – April 12, 1945), commonly known by his initials FDR, was an American statesman and political leader who served as the 32nd President of the United States. A Democrat, he was elected four times and served from March 1933 to his death in April 1945. He was a central figure in world events during the mid-20th century, leading the United States during a time of worldwide economic depression and total war. Presidents, along with Abraham Lincoln and George Washington. 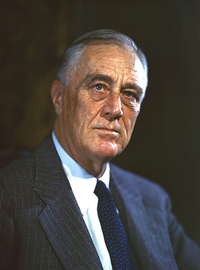