Francis Nicholls (January 18, 1955 – March 31, 2014), better known by his stage name Frankie Knuckles, was an American DJ and record producer. Knuckles was born January 18, 1955 in The Bronx, New York; he later moved to Chicago. He played an important role in developing and popularizing house music in Chicago during the 1980s, when the genre was in its infancy. Due to his importance in the development of the genre, Knuckles was often known as "The Godfather of House Music." Chicago named a stretch of street and a day after Knuckles in 2004 for this role. His accomplishments earned him a Grammy Award in 1997. Knuckles was inducted into the Dance Music Hall of Fame in 2005 as recognition for his achievements. Knuckles died of Type II diabetes-related complications in Chicago on March 31, 2014 at age 59. 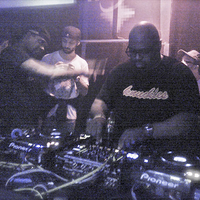 image credit
Frankie Knuckles by deepstereo, is licensed under cc-by-2.0, resized from the original.