Frances Louise McDormand (born June 23, 1957) is an American film and stage actress. She has won an Academy Award and a Tony Award.McDormand married director and writer Joel Coen in 1984 and has starred in several of the Coen brothers' films, including Blood Simple (her 1984 debut), Raising Arizona (1987), The Man Who Wasn't There (2001), Burn After Reading (2008) and most notably, her performance as Marge Gunderson in the 1996 film Fargo, which won her the Academy Award for Best Actress. In 2011, she won the Tony Award for Best Actress in a Play for her performance as Margi Walsh in Good People. 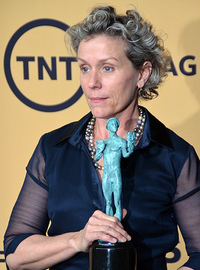 image credit
Frances McDormand by Red Carpet Report on, is licensed under cc-by-sa-2.0, resized from the original.